Get a Kick Out of Kobi Levi's Wild and Wacky Shoes 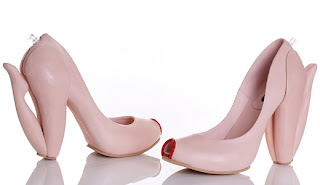 If you get a kick out of super-wacky high fashion, then you'll probably love Israeli designer Kobi Levi's line of outrageously funny footwear.The freelance shoe designer from Tel Aviv is famous for creating uniquely artistic footwear that makes even the most sophisticated slipper look like a generic old pair of sneakers.

Levi's risque designs include a pair of porn-inspired "XXX Pumps" shaped like a woman's private parts and another pump dubbed "Blow," shaped like a curvy lady down on her knees.But not all his works are adult-themed. He also offers sleek, strappy sandals that have a slingshot for a high heel, a bright yellow slip-on shaped like a peeled banana and a pair of brown peep-toe pumps resembling a dog -- complete with droopy ears for the heels.
Meanwhile, Levi's "Miao 2010" style mimics a slinky kitty, his "Tongue" wedge makes it appear as if the foot is being swallowed whole by a mouth, and the "Chewing Gum" design boasts a bright pink high heel resembling bubble gum, making it look like the wearer just stepped in a big glob of the sticky stuff.
Posted by Unknown at 11:05 PM

Email ThisBlogThis!Share to TwitterShare to FacebookShare to Pinterest
Labels: Fashionista