I spy with my good eye...MIMI BLIX! 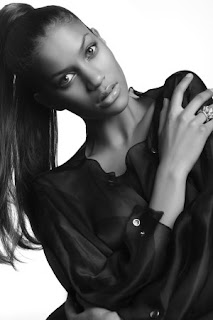 Mimi Blix was born 1. September 1991 in Askim, Norway.She is of African and Norwegian roots. Her father is from Uganda and mother from Norway. She has one older sister, Nani Blix Mutabazi. She started modelling when she was just 4 years old in local fashion shows. She is also a former ballet dancer. It was photographer Viggo Jensen who discovered her, and he got her in to a modeling agency in Fredrikstad. She started in autumn 2007 and it did not take long before she was discovered by a photographer in Oslo, Morten Kvale, and she was sent to Paris for test shoots. She has been seen in Norwegian magazines like Henne and Elle.

Kudos babe. I see a Ugandan Tyra Banks in the very near future.
xoxo
Posted by Unknown at 5:52 AM

Email ThisBlogThis!Share to TwitterShare to FacebookShare to Pinterest
Labels: Fashionista